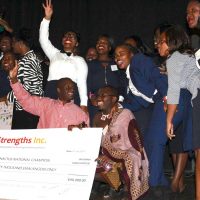 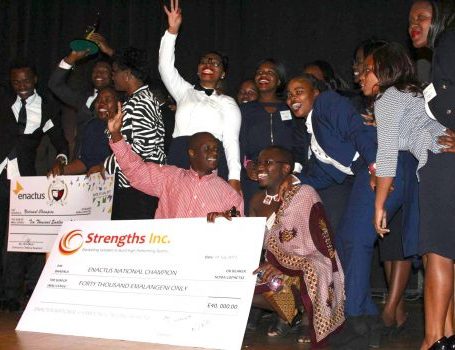 Our proudest moment of the past year:
Creating a good project that transformed the lives of others.

Biggest challenge from the past year:
“Team members giving up on Enactus work because they were unable to balance Enactus with schoolwork.” To encourage the other team members, several motivational workshops were conducted with the team with the help of the country office and Enactus alumni.

Team described in one word:
Dynamic.

As did some of her fellow members, Tibusiso initially found it difficult to balance the demands of class work and her involvement with Enactus after another student recruited her to join the team. One year later, she’s mastering how to manage her time efficiently to balance the two priorities. As communications manager for the team, she’s helping others to do the same: “I interact with people easily and am good at organizing timing as we come up with ideas,” she says. Majoring in business finance, Tibusiso plans to graduate in October 2018.

As operations manager for the team, Siyabonga says he’s honed his information-technology and presentation skills, but he also finds himself serving as its inspirational speaker as well. “I have a good team-working spirit, and I think outside the box,” says Siyabonga, also a business finance major who aims to graduate in October 2018. “I motivate team members to never lose hope on the team when they have given up.” Siyabonga says he, too, struggled at first to manage his time over the past year after he added Enactus projects to a schedule already packed with school work and home chores. “I had to really think and understand how each is important in my life,” he says.