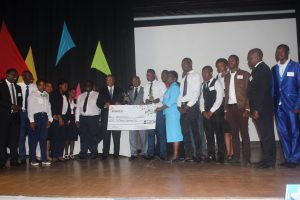 Biggest challenge from the past year:
Funding challenges for projects

Team described in one word:
Committed

As a member of the presentation team, Londiwe credits her Enactus experience for her growth as a public speaker and says improvement in this area is her biggest success of her nearly two years with the team. Now serving as Human Resource Manager, this Business Finance and Accounting major originally got involved after some members encouraged her to check it out – she immediately connected with the mission and has engaged ever since, even as she wrestled with the challenge of balancing school work and Enactus work. As she prepares for her second World Cup experience, she’s excited to connect with business leaders and entrepreneurs from around the world.

When he attends the World Cup in Toronto with his team in a few weeks, it will be the second time Phinda has had the opportunity to represent his country on the global stage: he was part of the Enactus Swaziland National Champion team to travel to South Africa for last year’s World Cup, an experience he says is the biggest success he’s had through Enactus. Now the team’s CEO, who first got involved after learning about Enactus during a class presentation, is excited to lead his team to Toronto to celebrate their accomplishments together while taking in all the event has to offer, including networking with the global leaders in attendance.