According to the United Nations Environment Program, approximately one-third of the 1.3 billion tons of food produced globally every year is wasted. This results in not only food wasted that could have nourished some of the estimated 8.9 percent of the world population who go hungry every year but also the unnecessary production of greenhouse gases that contribute to climate change. (In fact, if food waste were a country, it would be the third largest emitter of greenhouse gas in the world, behind China and the United States.)

With a passion for tackling climate change while simultaneously addressing the problem of food waste, the Enactus National Champions from EPF Graduate School of Engineering, Montpellier, in France, set their sights on “ugly” produce. The team’s project, PimpUp, is designed to reduce food waste at its source — during the production stage.

“We are passionate about fighting climate change, [and] food waste is one of the main problems to solve if we want to feed more people without producing more,” says PimpUp Co-founder and Chief Operation Officer Anaïs Lacombe. “To do so, we propose an alternative to supermarkets: baskets of ‘imperfect’ fruits and vegetables — sometimes messy and always tasty.”

For eight months, the two-person team spoke with farmers across France to learn more about this less-desired produce, diving deep into the “dark sides of agricultural production,” Lacombe says. “We faced producers who told us that this production does not exist,” she notes.

Inspired by the U.S. company Imperfect Foods’ model, the National Champions seized the opportunity and began partnering with French farmers to collect both surplus fruits and vegetables and those that are imperfect in shape, size or color. PimpUp uses these to create, sell and deliver baskets of assorted, seasonal produce to openminded customers, providing a direct link between producers and consumers. “We create the most convenient and responsible way to do grocery shopping,” Lacombe says.

The model is a win-win as it provides PimpUp customers with fresh, quality, affordable produce every week and farmers with extra revenue. Because of the nature of the product, the team can sell the produce at competitive prices — on average, up to 30 percent cheaper than the supermarket equivalent. What’s more, the Enactus National Champions offer discounts to students and families facing food insecurity to encourage them to eat healthy food.

More than just produce, PimpUp’s “food baskets with context” also provide customers information on how to get the most out of their weekly delivery with healthy recipes on its website tailored to each basket’s contents. 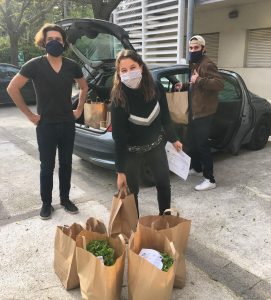 The environmental impact of PimpUp is notable. The team has already saved more than 15,000 pounds of perfectly delicious and nutritious fruits and vegetables from going to waste, and its approach to sourcing is only amplifying its already powerful impact. The Enactus National Champions source all produce from a catalog of farmers — members of the Association of Producers of Occitania — located within 62 miles of where it will be consumed.

More than environmental, the project also has economic, social and cultural implications.

“By saving food from waste, we fight climate change. We also use clean energy to deliver our baskets,” explains Lacombe. “We bring new revenue to farmers. We employ people in social reintegration to make our boxes. We communicate the seasonality of fruits and vegetables, which brings meaning to the plates and, therefore, to the lives of the people.”

The team has seen success, in part, thanks to partnerships with other student organizations, industry experts and several global companies that are also fighting food waste through the marketing and sale of “ugly” produce. But the National Champions don’t plan to stop there. “We want to create an online anti-waste supermarket to eradicate food waste in production,” Lacombe says. “We want to save 100 million kilograms (approximately 220,462,262 pounds) of food in France and Europe [by] 2030.”

EPF Graduate School of Engineering, Montpellier will represent France at the Enactus World Cup starting 14 October, where the team will present their project alongside 32 other Enactus National Champions. There, they will demonstrate their innovation in business and its impact on the world as they vie for their chance to become the Enactus World Champion.