Pasay City, Philippines – Mariano Marcos State University was named the 2013 Enactus Philippines National Champion at the two-day event held at the SMX Convention Center in Pasay City. This will be the third time they will represent the Philippines at the Enactus World Cup.

This year’s competition was opened with a speech by Senator Benigno Bam Aquino who encouraged the Enactus members to work together and inspire each other. Nona Ricafort, commissioner for the Commission for Higher Education, awarded the plaques of participation to the competing schools and urged observer colleges and universities to become an active part of Enactus Philippines.

Judges were impressed with the diversity of team projects presented at this year’s event, which ranged from:

At the closing ceremony Senator Jinggoy Ejercito Estrada awarded the top four winners of the competition. Enactus Philippines Chairman, Jose P. Leviste, Jr. wrapped up the event with comments regarding expanding the Enactus program all over the country in the coming year with the support of the Commission on Higher Education and the Philippine Chamber of Commerce and Industry. 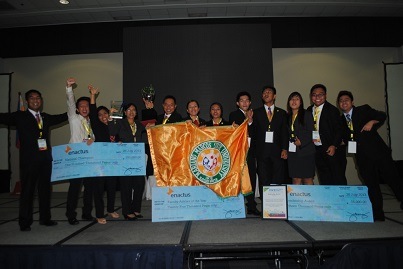