Since the 1950s, the rate of plastic production has grown faster than that of any other material, with an estimated 8.3 billion tons of plastic waste produced since that time, according to the United Nations Environment Program. Today, 300 million tons of plastic waste is created every year, a significant portion of which is single-use, non-durable plastics that typically cannot be recycled — things like shampoo bottles, grocery bags and utensils. Making things worse, 8 million tons of this discarded plastic makes its way into the world’s oceans every year.

With a passion for tackling the global plastic waste problem, the Enactus National Champions from the National School of Sciences of Khouribga in Morocco decided to home in on one of the main culprits: plastic utensils. For too long, these products — made from polystyrene — have been considered the only option for cheap, disposable utensils. But that is changing thanks to the work of these Enactus National Champions.

“As changemakers, we care for our planet, and we need to take action in order to guarantee its sustainability for the next generations,” says team member Hamza Chami.

Following a needs assessment, research and brainstorming, the team landed on its solution: a tasty and nutritious alternative to plastic utensils. Through their project, Bistic, the National Champions produce biodegradable products, made with natural ingredients including wheat, rice and millet, that you can eat with, then eat afterwards. Available in both savory and sweet flavors — the edible utensils are free of chemicals and preservatives and are high in nutritional value. In addition, they can be used with any type of food and any dish — hot, cold, solid, liquid. 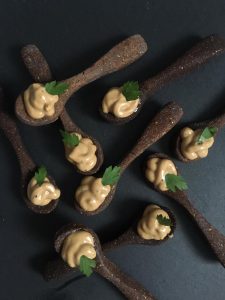 To develop the product, the National School of Sciences of Khouribga team has partnered with and trained several local women, most of whom live below the poverty line. The project has provided them an opportunity to secure financial stability for themselves and their families. “We empower Moroccan youth and women with culinary knowledge with job opportunities,” Chami says. “We help to improve their livelihoods, [and] now they can afford their basic needs and live in better conditions.”

Bistic’s impact has gone beyond social, economic and environmental to include cultural. Initially seen as a barrier to their project’s success, the Morocco National Champions have made progress toward encouraging responsible consumption on a national scale.

Convincing even more people of the importance of responsible consumption remains the team’s No. 1 goal as it forges ahead. However, Chami says the team also hopes to diversify the Bistic product line and to reach even more consumers by expanding beyond Morocco’s borders. “We aim to reach 20 percent of our B2B market in the next 10 years, working with coffee shops and restaurants in Morocco and other countries,” he says. “For that, we will work on launching production units in many countries.”

The National School of Sciences of Khouribga will represent Morocco at the Enactus World Cup starting 14 October, where the team will present their project alongside 32 other Enactus National Champions. There, they will demonstrate their innovation in business and its impact on the world as they vie for their chance to become the Enactus World Champion.