Among the 28 teams competing, five new teams competed for the first time. In the end the University of Malaysia Sabah claimed the title for the second consecutive year and will go on to represent Malaysia at the Enactus World Cup.

The UMS team showcased several impressive projects including the Payao Project, which developed a special mechanism for the fishermen of Mabul Island in Sabah to increase their income, and the Unfold Project, a project that taught 142 underprivileged individuals to produce handicrafts and accessories with recycled materials.

Even with such impressive projects, judges still had a difficult task picking a champion as all of this year’s competing teams brought their best to the stage. Community outreach efforts ranged from introducing low cost animal feed to five families rearing livestock and helping mentally disabled individuals with employment to fostering entrepreneurship among area women.

The Royal Patron of the Enactus Malaysia Foundation, His Highness Tunku Besar Seri Menanti, Tunku Ali Redhauddin Ibni Tuanku Muhriz, crown prince of Negeri Sembilan, was the special guest at this year’s competition. He commented on the high caliber of the projects and presentations, as well the creativity and innovation showcased by teams.

Also in attendance was the honorable Deputy Minister of Education II, YB. P. Kamalanathan , who called all Enactus students winners and commended the teams for tapping into entrepreneurial spirit and channeling their unique ideas and talents toward creating good for the world.

In addition to the competition, many students also participated in new initiatives such as the Enactus Malaysia Hour, and fun recognitions including the naming of the EMNE 2013 King and Queen, the Best Flash Mob Dancer and Best Enactus Team Cheer. 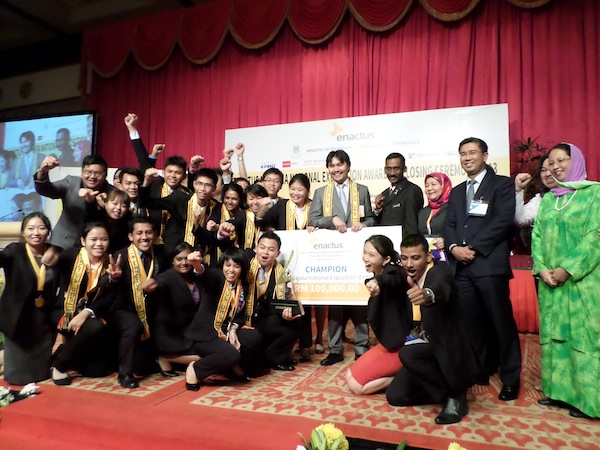