Tokyo, Japan – The 2013 Enactus Japan National Competition goes on record as having the county’s largest number of team participants – this year 17 teams competed at the Hotel Cadenza Hikarigaoka in Tokyo.

Claiming the national champion title was The University of Shiga Prefecture. Among their winning projects was an effort that employed the disabled to transform plastic bottle caps into flower planters. The planters are then arranged with flowers and businesses pay a “leasing” fee to keep the planters maintained. This effort alone generated more than $11,000.

Last year the 20-member team contributed nearly 400 volunteer hours to three community outreach projects. This is the first time The University of Shiga Prefecture will represent Japan at the Enactus World Cup.

To give teams additional feedback on their projects and presentations, the event included an “Audience Judge” at the final round of competition. Not connected to the actual competition results, this activity was designed to give teams greater perspective and was a fun way for attendees to participate in the event. 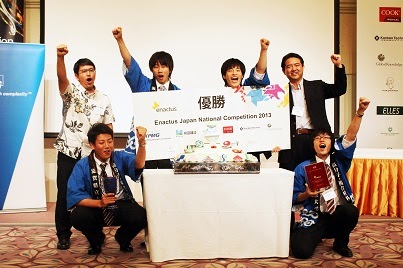