In a close competition, Team India has emerged as the winner of the 2017 Enactus World Cup.

Enactus is an international non-profit dedicated to inspiring students to take entrepreneurial action to improve the lives of others. The Enactus World Cup is an annual event featuring the best social innovation projects created by the top university and college teams from 36 countries, qualified from 1,700 campuses and 72,000 student participants around the globe.

Enactus Team India, represented by Shaheed Sukhdev College of Business Studies, was named World Champion for Project Raahat, which aims to increase sanitation in slum communities of urban Delhi, and Udaan, an initiative that empowers women to operate computer centers in rural India to promote skill development and increase awareness of economic opportunities.

The final round of competition also featured Enactus teams from Puerto Rico, Canada, and Kyrgyzstan, with Canada taking second place.

Learn more about the competing teams and their projects at enactus.org/worldcup/meet-the-teams.

The Ford Motor Company Fund also announced that the four Enactus finalist teams will receive a total of $90,000 USD in the new annual Ford Better World Award, recognizing excellence in social impact, with a total of $50,000 going to Shaheed Sukhdev College of Business Studies and the Enactus country of India. 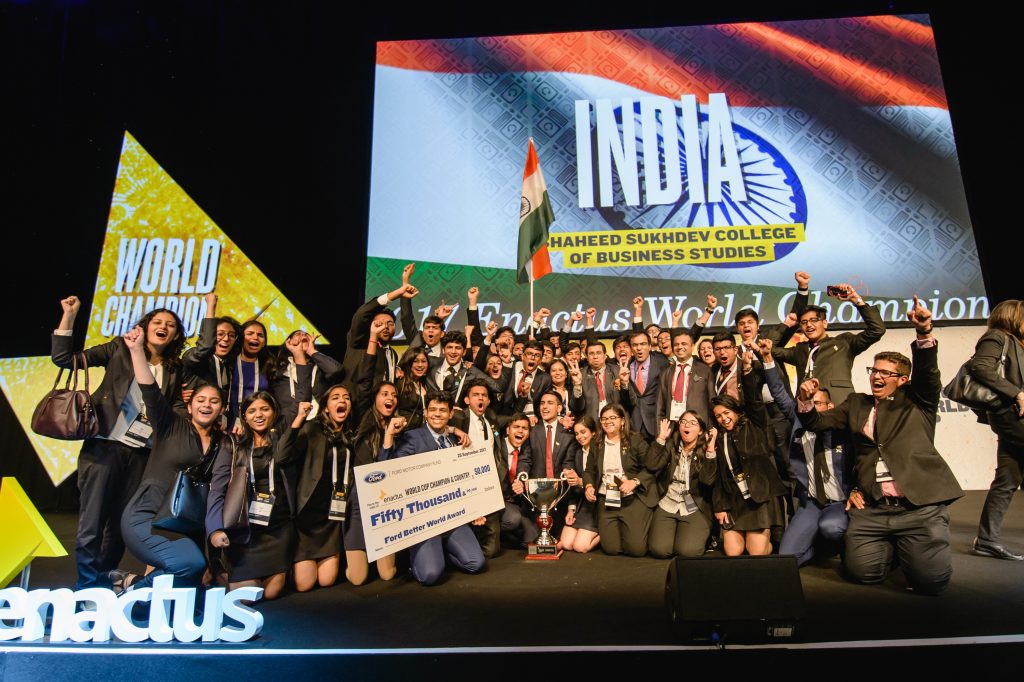 “Ford Motor Company Fund is always on the lookout for transformational ideas that make people’s lives better through innovation and access,” says Jim Vella, President, Ford Motor Company Fund. “The outstanding student teams competing at the Enactus World Cup are turning this vision into reality and are a shining example of the power of social entrepreneurship to change lives and transform communities.”

The outstanding student teams competing at the Enactus World Cup are turning this vision into reality and are a shining example of the power of social entrepreneurship to change lives and transform communities.
—Jim Vella

Unilever received the Global Champion Award for their 30-year commitment to Enactus.

Additionally, Paul Polman, CEO, Unilever, was awarded the Enactus Entrepreneurial Spirit Award, which is presented to individuals who exemplify the transformative power of the entrepreneurial spirit by applying their talents, passions and business innovation to achieve exceptional success in business, while enabling greater progress for people around the world.

In his acceptance speech, Paul Polman said, “You have decided by virtue of your commitment to Enactus to put yourself to the service of others. My appeal to you is to lead a life of purpose… a plan for people, peace, prosperity, and the planet.”

KPMG presenting sponsor of the Enactus World Cup since 2012, renewed their commitment for the next three years.

“Enactus’ long-term partnerships are an affirmation of the powerful work and positive impact our students and alumni are creating worldwide,” says Rachael Jarosh, President and CEO, Enactus.

Video highlights from Enactus World Cup 2017 can be viewed at enactus.org/worldcup. To learn more, visit enactus.org/get-involved.