Around the world, financial barriers, poor education and stigma force many people into period poverty. Defined as inadequate access to menstrual products and education, period poverty is experienced by nearly 25 percent of all people who have periods, according to the charitable organization Days for Girls. That’s more than 500 million people who lack access to feminine hygiene products.

With an understanding of how widespread the issue is and a desire to make a difference, the Enactus National Champions from the University of Limerick in Ireland launched their project Anytime of the Month. The team is igniting a conversation about periods by improving access to period products and knowledge about menstruation, ultimately diminishing the stigma and taboos surrounding it.

“My team was inspired to address period poverty as people still believe [it] isn’t an issue,” says team member Rachel Kingston. “[We are] passionate about period poverty as so many people have to put their menstrual health on the back burner.”
One way the team is working to address the issue of period poverty is by providing access to feminine hygiene products. Anytime of the Month donates these products to places where people may need them most — homeless shelters and direct-provision shelters (those for asylum seekers in Ireland) — “to make sure that the people affected will be able to have period products [at] their disposal,” Kingston says.

The National Champions have also successfully encouraged universities, cafés and corporate offices to offer period products free of charge to their constituents. This work has involved collaborations with student unions, including those at Trinity College, University College Dublin, Limerick Institute of Technology and National University of Ireland, Galway, as well as organizations such as Ebay, Piquant Media and Aoife Ireland.

Reducing stigma around and shame associated with talking about one’s period is another goal of Anytime of the Month. To do this, the University of Limerick team is facilitating educational opportunities for working professionals.

“Our corporate workshop team hosts workshops for organizations like Ebay, The Labour Party and The Irish Women Lawyer Association,” Kingston explains. “The workshops cover topics like period poverty in the workplace, cultural diversity and the LGBTQ community.”

One of the greatest challenges the Enactus National Champions faced was getting businesses on board with both participating in the workshops and offering free products in their workplaces. But by focusing first on growing its Instagram account and doing outreach to small businesses and universities, the team has been able to amplify its impact. “Our name started to spread around the country from word of mouth and our social media pages,” says Kingston.

Anytime of the Month has done much to reduce the stigma around periods, and the team hopes to continue to build upon its success. “[Our] long-term hopes and goals for Anytime of the Month are that we impact as many people as we can and make periods an easy conversation to have with everyone,” Kingston says. “We want to have every business on board to provide free period products, to make sure all workers don’t have to experience period poverty in the workplace.” 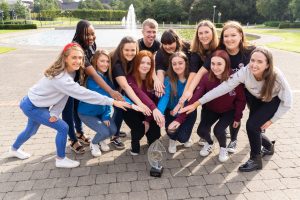 University of Limerick will represent Ireland at the Enactus World Cup starting 14 October, where the team will present their project alongside 32 other Enactus National Champions. There, they will demonstrate their innovation in business and its impact on the world as they vie for their chance to become the Enactus World Champion.