Ludwigshafen, Germany – From among 20 competing teams, the Technical University of Munich has been named the Enactus Germany National Champion. This is the first year the team will represent Germany at the Enactus World Cup.

The team showcased several innovative projects at the competition, including an effort that enabled marginalized individuals to make and sell drinking glasses, a game aimed at teaching financial literacy to bee farmers and even a project that generated drinking water from fog.

This year’s event also featured several awards to recognize outstanding projects, ambitious teams and the commitment of Enactus Germany stakeholders. Technical University of Braunschweig was the north region winner of the outstanding project award for their effort that created special embroidered tablecloths to help visually impaired individuals handle glasses and cutlery while dining out. Christiane Blank from Wuppertal University was awarded Advisor of the Year and Talanx received Partner of the Year.

Special thanks to BASF SE for being the event sponsor and Michael Heinz, member of the board of executive directors at BASF SE for delivering this year’s keynote address. 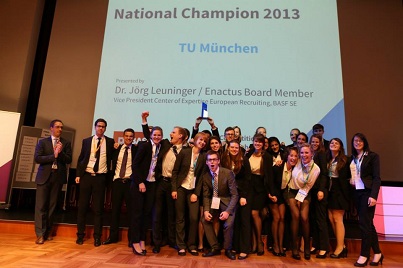