“Most of the people affected live in developing countries and mostly in rural areas with no access to eye screeners,” says Chase Boudreau, a member of the Enactus U.S. National Champion team from the University of Wisconsin-Whitewater.

With a desire to improve access to eye care for those most affected, the team created Aadya, a technology-based solution to the lack of eye care infrastructure in underserved areas. With funding from the global nonprofit Combat Blindness International, the University of Wisconsin-Whitewater team is providing eye screenings free of charge for people in rural India who previously faced challenges accessing this basic healthcare service. The screenings are made possible using international ophthalmic optics company Essilor’s “Clickcheck” technology and the smartphone app Peek Acuity. 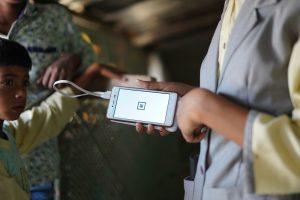 In addition to regular eye screenings, Aadya’s sustainable business model is providing jobs to people in rural India, with a focus on women. Because of restrictive cultural norms, many Indian women do not work, putting them at a severe economic disadvantage. In fact, in India, only 20 percent of women aged 15 and older participate in the labor force, compared to 76 percent of men, according to data from global nonprofit Catalyst. These women also earn less than men — making, on average, 65.5 percent of what their male colleagues earn for the same work, based on hourly wages.

With boots-on-the-ground training provided by Aadya partner Dr. Shroff’s Charity Eye Hospital, the project is giving these women, who work as screeners, a chance at a better life. “Our focus on employing women ties back to the many economic and social deficiencies that exist between women and men in Indian culture and around the world,” Boudreau says. “Aadya not only gives sight back, but also another chance to fulfill one’s dreams and aspirations.”

Through Aadya’s partnership with Essilor, Dr. Shroff’s is able to distribute as many as 5,000 spectacles free of charge, but the hospital also sells affordable, customizable glasses to those in need. The project itself is sustained via income from the sale of specialized spectacles and surgeries completed based on referrals.

Thus far, these National Champions have had an immense impact on the rural communities they set out to change. To date, they have conducted over 2,800 screenings and provided more than 500 pairs of glasses to those in need as well as created jobs for many young women while paying them a sustainable wage, says Boudreau.

“We have closed the gap between rural villages and eye hospitals, essentially diminishing the infrastructure issue,” he says. “We have ensured the proper training and employment of women, helping to eliminate gender norms and diminish inequalities in the workforce.”

Boudreau believes the project’s success can be traced back to its partnerships and sustainable business model, which has enabled Aadya to not be fully dependent on funders and is key to allowing the team to achieve its long-term goals. “We would like to take Aadya across the world and ensure the proper care and distribution of eye care resources and facilities for all, no matter their ability or lack thereof to pay,” Boudreau says.

The University of Wisconsin-Whitewater will represent the United States at the Enactus World Cup starting 14 October 2021, where the team will present their project alongside 32 other Enactus National Champions. There, they will demonstrate their innovation in business and its impact on the world as they vie for their chance to become the Enactus World Champion.