In the United Kingdom, before converting food waste into animal feed or energy, companies are required to use this surplus food to feed people. In spite of this regulation (known as the waste hierarchy), 3.6 million tons of food is wasted by the food industry every year in the UK — over 2 million tons of which is still edible, according to the organization FareShare. At the same time, 8.4 million people in the UK struggle to afford food.

For the Enactus National Champions from the University of Southampton in the UK, this problem was a call to action. With a focus on addressing both the environmental and economic consequences of food waste, the 25-person team launched a project called Future Brew (which has since changed its name to Immediate), with help from investors.

A zero-waste company that creates value out of unwanted surplus food, Future Brew operates through partnerships with local bakeries, breweries and homeless shelters, with assistance from FareShare. Every week, the team collects surplus food, most of which it distributes to homeless shelters to feed hungry families. Unsold bread, however — the focal point of the project — goes to the breweries, where students themselves, employed by Future Brew, make the beer.

“By using waste bread, the business utilizes circular economic principles to derive value from surplus materials,” says team member Sarah Rogers. “In doing so, the benefit is threefold: Surplus material is saved from landfills, wealth is created at a limited cost to the company and, cumulatively, the business is able to provide value to society. By delivering our product to market, the company is able to … redirect waste from the end of the supply chain to the beginning.”

It takes approximately 33 pounds of discarded bread to brew 10 kegs of beer — the equivalent of nearly 550 pints — which equates to about one slice per pint. When the company’s kegs first hit the market at the university’s on-campus pub, Stag, the beer sold out in one night, with over 500 pints sold. 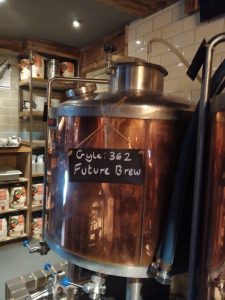 “It is not only our beer that is helping contribute to a cleaner planet,” Rogers says, “but our entire supply chain has carefully designed operations that enable us to say we are a carbon-negative company.”

Feeling emboldened, the University of Southampton National Champions decided to go one step further. “We recognized food waste was just a small part of a much greater problem: climate change,” Rogers says.

Using “the UK’s drinking culture as a vehicle for driving awareness about climate change, sustainability and social responsibility,” she says they’ve been able to create a socially and environmentally intuitive brand. For these National Champions, this means minimizing their carbon footprint.

“It is not only our beer that is helping contribute to a cleaner planet,” Rogers says, “but our entire supply chain has carefully designed operations that enable us to say we are a carbon-negative company.”

To make this possible, Future Brew uses ingredients within a less than 200-mile radius and sells its kegs within 20 miles of its breweries, using bicycles and electric vehicles when and wherever possible. The team uses recycled aluminum for its cans, packages composed of at least 80 percent recycled material, water-based ink rather than those made with petroleum and no single-use plastic. “[We also] convert byproducts from the brewing process into biofuels or animal feed,” says Rogers. “We do all of this to ensure that we are tackling global problems at every stage in our supply chain.”

The team’s efforts are paying off: Every pint of Future Brew beer represents 5.6 ounces of CO2 saved — for a total of 12.8 tons to date — and the project has provided ingredients for 8,700 meals to 60 families for three months; that’s 3.8 tons of food saved from landfills. Furthermore, this Enactus National Champion team supports the employment of three individuals and has educated 300 children on the effects of climate change. But this group of champions is not stopping there.

“By the end of 2023, we are going to be operating in four countries, inhibiting the emissions of thousands of tons of CO2 and resulting in monthly sales of millions of pounds,” Rogers says.

The University of Southampton will represent the United Kingdom at the Enactus World Cup starting 14 October 2021, where the team will present their project alongside 32 other Enactus National Champions. There, they will demonstrate their innovation in business and its impact on the world as they vie for their chance to become the Enactus World Champion.