Across the Middle East and North Africa (MENA) region, and more specifically in Tunisia, livestock breeding is facing challenges. Given the region’s climatic and geographic constraints, arable land is decreasing, meaning countries must import more raw material — mostly soy and corn — for cattle feed. Yet, with a small market and a dearth of storage, Tunisia is only able to purchase small quantities of the raw materials necessary for livestock feed.

The end result is rising prices for cattle feed — an issue that has forced some Tunisian breeders to abandon a trade they can no longer afford; this affects the lives of many Tunisians, as the country’s livestock sector contributes more than 40 percent to the country’s agricultural production. The rise of animal feed prices also means a significant increase in the cost of meat, making it a luxury for most Tunisian families.

Emboldened to change the status quo, the five-time Enactus Tunisia National Champions from the Institute of Higher Commercial Studies of Carthage – IHEC Carthage decided to take action. Team member Eya Kharbech says she and her fellow teammates “couldn’t stay indifferent toward this problem.”

The team set out to substitute the imported ingredients in livestock feed with local ones while maintaining the same nutritional value. The result is their project YouFeed, a 100 percent Tunisian concentrated livestock feed. 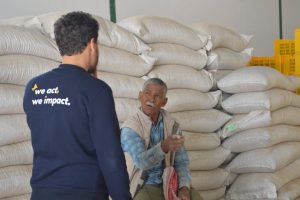 The challenge the team faced was developing an optimal formula of cattle feed that met three criteria: local, effective (containing the required nutritional value) and cost-efficient. To achieve all three, the Enactus National Champions partnered with the Tunisian Union of Agriculture and Fishing and the Office of Livestock and Pasture, which provided technical expertise and helped the team gather necessary information about cattle breeding in Tunisia to develop an effective formula.

Through their research, the National Champions discovered that 35 percent of dates produced in Tunisia were being thrown away and, subsequently, that the discarded dates could provide 87 percent of the digestible energy for sheep. “By including them in the formula, we will be saving more than 132,000 pounds of waste per year, bringing us closer to achieving the UN’s 12th Sustainable Development Goal,” Kharbech says.

To date, YouFeed has generated a total revenue of $2,500 and helped Tunisia save more than $1 million dollars of hard currency. The project has also created five job opportunities and has saved hundreds of farmers money.

YouFeed’s product range is currently focused on sheep feed, but the Tunisia National Champions plan to develop formulas for other livestock, including cows, goats and horses. “We hope to increase market share in the cattle feed industry and expand the project to other countries of the MENA region,” Kharbech says.

The Institute of Higher Commercial Studies of Carthage – IHEC Carthage will represent Tunisia at the Enactus World Cup starting 14 October, where the team will present their project alongside 32 other Enactus National Champions. There, they will demonstrate their innovation in business and its impact on the world as they vie for their chance to become the Enactus World Champion.