Of the 1.3 billion tons of food that is lost or wasted each year, 25 percent comes from South and Southeast Asia, according to a study conducted by the nonprofit institute Future Directions International. In Manila, capital city of the Philippines, 2,175 tons of food scraps end up in the garbage daily.

Although disheartening and overwhelming, these statistics served as a driving force for the three-time Enactus National Champions from Holy Trinity College of General Santos City in the Philippines. “The enormous quantity of food waste provided us with an opportunity — it became our motivation — which inspired us to create an innovation that would turn this waste into renewable energy,” says Team President Joeymar Casinao.

Instead of viewing food waste as a worsening issue causing ecological and economic strain on their country, the Philippines National Champions chose to reframe it as an abundant resource that just needed repurposing. After conducting consultations, research and prototype experimentations, they launched the Gas Refinement from Ecological Waste (GREW) project. The venture converts agricultural and industrial waste — including livestock manure and food and liquid waste — into biogas, or fuel that is naturally produced from the decomposition of organic matter.

The conversion of waste to fuel happens through a multi-phase process called anaerobic digestion, in which bacteria break down organic matter. The whole process takes 15 to 30 days, and the result is usable methane.

The first phase of GREW has focused on supplying gas to businesses that sell reusable canisters of gas. The biogas is transferred to the refillable canisters, which can be used as a substitute for traditional cooking fuel like charcoal. The team estimates that, within nine months of operation, 900 aluminum canisters have been sold. 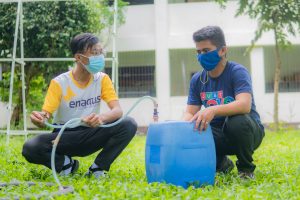 To achieve this, the Philippines National Champions collaborated with several partner-beneficiaries, including farmers from the Katangawan district in General Santos City, at-risk youth who are being served by the Marcellin Foundation and experts and consultants in the field of waste management. They are also working to create partnerships with local government, especially agencies specializing in waste management. 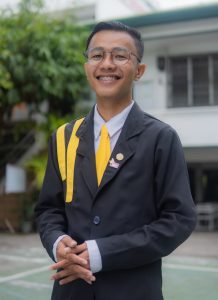 “The enormous quantity of food waste provided us with an opportunity — it became our motivation — which inspired us to create an innovation that would turn this waste into renewable energy.”
—Joeymar Casinao, Team President

With the project now entering its second phase, the team is training its partners to safely use the system in order to generate their own income, with a focus on two main roles: those responsible for constructing the system and producing the biogas, and those who collect the waste for production and handle product delivery and marketing. Training has included the creation of a multilingual catalog that explains the production process as well as short courses that introduce basic business and marketing skills.

“We are transforming and empowering the lives of our community partners, as [the project] provides a supplemental source of income and additional entrepreneurial skills,” Casinao says, “— and we are promoting environmental sustainability.”

The canisters of biofuel are currently being sold online and throughout the city; however, the team’s vision is to sell the GREW system itself to expand their impact globally.

Holy Trinity College of General Santos City will represent the Philippines at the Enactus World Cup starting 14 October, where the team will present their project alongside 32 other Enactus National Champions. There, they will demonstrate their innovation in business and its impact on the world as they vie for their chance to become the Enactus World Champion.