In the small West African coastal nation of Togo, mosquitos are not just a pest but a potentially fatal health hazard. There, malaria — a highly preventable disease spread via bites from infected mosquitos — is not only the leading cause of hospitalization but also death. Worldwide, malaria claims the lives of some 400,000 people every year, according to data from the World Health Organization (WHO). Africa, however, bears the brunt of this burden with 94 percent of all malaria cases.

While working on a previous project at hospitals in Togo, the eight-time Enactus National Champion team from the University of Mannheim in Germany saw firsthand malaria’s devastating effects on the people of Togo, where more than 50 percent of the population live below the poverty line. Eager to make a difference, the team immediately got to work.

First, the National Champions had to determine why so many Togolese weren’t protecting themselves from mosquitoes in the first place. “We found out that mosquito repellents are not accessible to most of the rural population in Togo — and even for the people in the cities, mosquito repellents are way too expensive,” says team member Sebastian Starke. “We found out that bed nets only protect people at night, but [at] dusk, when mosquitoes are most active, a lot of people have no opportunity to protect themselves.”

Further research revealed that the majority of Togolese people use body lotion on a daily basis — most of whom apply it right after work and before the sun sets, Starke explains. Seizing on this opportunity, the 75-person team launched their project, Moufense, to develop a mosquito-repellent body lotion that’s both accessible and affordable — not to mention easy to adopt. “Our body lotion can be integrated into the daily routine of the people without forcing a habit change,” Starke says.

Working with experts at the renowned Center of Clinical Tropical Medicine at Heidelberg University, the National Champions experimented to find the most optimal active ingredient for their lotion — what Starke says was their greatest challenge. The key requirements for Moufense: safety, efficacy and affordability.

“In multiple test runs, we compared different active ingredients and found Icaridin to fit best for our lotion,” explains Starke. “We experimented with the concentration of the Icaridin to keep our lotion affordable but still ensure a high-quality protection.”

The team partnered with the German research laboratory Biogents to test the lotion, according to the highest scientific standards, to determine its effectiveness. Results indicated a protection duration time of 3.5 hours. “Our mosquito repellent body lotion offers protection during [all of] dusk while at the same time being affordable and accessible,” says Starke.

Additional partners on Moufense have included Procter & Gamble, which assisted with its formulation, pricing and marketing, as well as local social enterprise Kopeme Group. With distribution employees who drive to Togo’s rural villages on a weekly basis, Kopeme Group has provided direct access to over 40,000 potential customers.

Early rollouts have proved promising for Moufense as the National Champion team sold its first 83 lotions in the test market phase. In addition to preventing mosquito bites, the project has employed three production assistants — all locals — who are paid three-times the minimum wage. 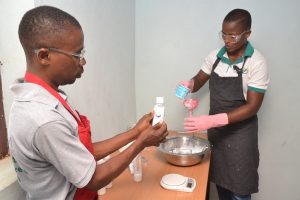 But Starke says they don’t plan to stop there. “Our long-term goal is to sell our body lotion all over Africa to create a lasting impact and protect thousands, if not millions, of people from malaria,” he says.

University of Mannheim will represent Germany at the Enactus World Cup starting 14 October, where the team will present their project alongside 32 other Enactus National Champions. There, they will demonstrate their innovation in business and its impact on the world as they vie for their chance to become the Enactus World Champion.