Nearly one-third of food produced for human consumption around the world — about 1.3 billion tons — is lost or wasted each year, according to a study commissioned by the United Nations Food and Agriculture Organization. What’s more, an estimated 20 to 40 percent of fresh produce is excluded from the market due to high aesthetic standards.

One of the vegetables to undergo rigorous cosmetic inspection is the carrot. In Brazil, the municipality of Rio Paranaíba — where the Enactus National Champion team from Federal University of Viçosa, Campus Rio Paranaíba (UFV-CRP) is located — is one of the largest carrot producers in the country. With a close connection to this issue, the team felt a responsibility to find a solution.

“We wanted to reduce the food waste,” says team member Anna Clara Lasso Souza. “[This sparked] the desire to search for innovative and sustainable solutions, balancing high production with a low socio-environmental impact.”

The team saw an opportunity to reduce the resources needed to process imperfect and unwanted carrots and instead use them to create something beneficial. Lasso Souza admits that the sheer amount of carrots wasted each year posed a challenge to repurposing them. However, after extensive research and lab testing, the National Champions found the answer: Raízes (“roots” in Portuguese), a project that transforms carrot waste into an unprecedented cattle feed.

The project has incredible potential. Diverting the carrots from landfills could reduce 301 tons of greenhouse gases and reduce the amount of water used for post-harvest processes by 23 billion gallons. Further expanding their impact, the team plans to sell the cattle feed at a low price point to make it affordable to local livestock breeders.

Raízes benefits the cattle, too. The carrot feed is high in protein and free of chemical and hormonal additives. The team has seen a 30 percent increase in cattle milk production and a substantial increase in their reproductive cells. 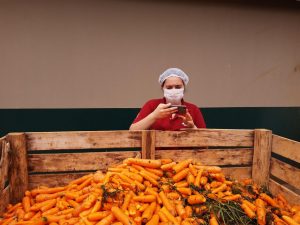 Despite the project’s current success, the Brazil National Champions faced several challenges because of the pandemic. “It delayed some face-to-face activities that were essential for the project, holding back large-scale production,” explains Lasso Souza. However, strong partnerships with organizations like Shimada, one of the largest carrot producers in Brazil, propelled them forward. “In partnership with this entity, we started to produce on a large scale, relying on machines and employees specialized by the company,” says Lasso Souza.

The Brazil National Champion team is interested in transforming the Raízes project into a social enterprise. “We want to set up a sales structure between companies, supplying the product to cooperatives and agricultural houses that are already consolidated in the market to sell to cattle raisers,” says Lasso Souza. Beyond that, team members hope to carry out further testing to determine viability for poultry supplementation and to expand the project to other carrot-producing regions of Brazil.

Federal University of Viçosa, Campus Rio Paranaíba (UFV-CRP) will represent Brazil at the Enactus World Cup starting 14 October, where the team will present their project alongside 32 other Enactus National Champions. There, they will demonstrate their innovation in business and its impact on the world as they vie for their chance to become the Enactus World Champion.