According to the International Agency for the Prevention of Blindness (IAPB) 43 million people are blind globally— an impairment that presents challenges for these individuals in not just completing everyday tasks but also in learning about and navigating the world.

In Kyrgyzstan — where an estimated 650,000 people are living with vision loss and 21,000 are blind, according to the IAPB — one group of college students felt compelled to change the status quo. Using tactile sound navigation cards, or maps, the Enactus National Champions from Kyrgyz State Technical University are improving the lives of blind and visually impaired people in Kyrgyzstan.

“The goal of the TAPTYK project is to create favorable conditions for a full life, satisfy the social and cultural needs of people with disabilities, and promote the introduction of innovative technologies and the development of inclusive education in specialized schools for the blind in Kyrgyzstan,” says Madina Myrzalieva, a member of the Kyrgyz State Technical University Enactus team

Inspired to help a team member’s brother who is blind, one member of the 15-person team created the first prototype of the tactile sound navigation chart at Makethon Bishkik 2019, a 72-hour marathon where inventors develop devices to assist children with disabilities.

“In the beginning, we decided to help him, but in the process, we found out there are a lot of people like him,” Myrzalieva says. “We believe that they should live as fully as everyone else.”

After making some improvements to the original prototype, the Kyrgyz State Technical University Enactus team arrived at the map’s final form. Made of plastic — using a 3D printer — the tactile-sound card includes both a visual and tactile part, a digital control system, an acoustic system and message activation buttons with audio messages that provide information about the object. “The signatures are made in the Braille system and the duplication of text information by voice allows you to use the device regardless of your reading skills in the Braille system,” says Myrzalieva. “The map is installed inside buildings and helps people navigate and find [where they need to be].”

She says TAPTYK’s greatest challenge lies in the fact that every building’s layout is different; therefore, each card is unique. Over time, however, the team has developed an efficient method for transferring a building’s plans to the map, and in working with the president of the social fund Phenomenon, Iskender Sultanaliev — who serves as an advisor on the project — they have been able to test the tactile sound map.

The Kyrgyz State Technical University team hopes the map becomes a part of everyday life for blind people as they use it to navigate buildings ranging from museums and sports complexes to banks and hospitals. “We plan to install maps in every public building,” Myrzalieva says. “We want our project to become part of the infrastructure of our cities.”

Empowering young people through education is also important to this Enactus National Champion team. Team members created tactile sound thematic maps, or cards, to be used as educational devices in the classroom. 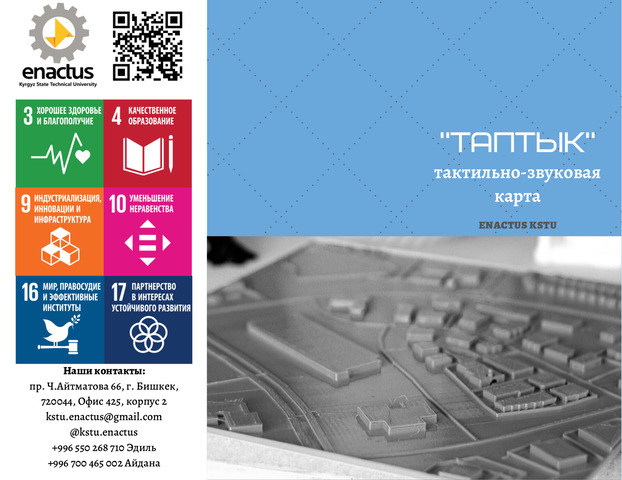 “How can students learn without maps in geography classes? Without them, it is generally impossible to study space and the world around us,” Myrzalieva notes. “It is extremely important to help visually impaired and blind people get acquainted with the maps of their native cities and regions so that they better understand and know their native land. Studying the geography of Kyrgyzstan and the world using tactile-sound cards will help blind and visually impaired students.”

The project has already helped more than 500 people and two organizations — the Community of the Blind in Kyrgyzstan and Public Fund Phenomenon — and the team continues to engage in outreach to schools and organizations. However, it doesn’t plan to stop there. As the project grows, the Kyrgyz State Technical University Enactus team plans to expand its target audience to people of all ages, eventually going international.

“Our main goal,” Myrzalieva says, “is to improve the lives of the blind and create equal conditions.”

Kyrgyz State Technical University will represent Kyrgyzstan at the Enactus World Cup starting 14 October, where the team will present their project alongside 32 other Enactus National Champions. There, they will demonstrate their innovation in business and its impact on the world as they vie for their chance to become the Enactus World Champion.