Since the Industrial Revolution, the amount of carbon dioxide in the atmosphere has risen by 40 percent, according to the National Oceanic and Atmospheric Administration’s (NOAA) website — a rate higher than at any other point in the past 800,000 years. Yet, as the impact of climate change has been growing, so has awareness of the issue and its effects on all living things.

Feeling emboldened by the issue and compelled to act, the Enactus National Champions from the University of Udine in Italy decided to take on the challenge of climate change.

“In the last several years, global warming has been getting worse and the effects are visible,” says Paolo Licata, Enactus team leader for the University of Udine. “Awareness of climate change and pollution is important but may not be enough; we all have to contribute in some way. Our passion was born from the need for this kind of solution.”

Licata, along with 13 other students from the University of Udine, are tackling climate change head on by addressing its root cause: carbon dioxide (CO2). Playing off of the popular carbon capture method of mitigating emissions, the team decided to go one step farther to not just sequester CO2 but to convert it into something usable — with an eye for advancing the decarbonization goals of the EU.

“We wanted to contribute proactively to the climate change issue and the effects of global warming,” says Licata. “But we thought, ‘Why just capture carbon? Let’s convert carbon dioxide into a value-added product.’”

Project CO2GNAC has proposed a technological solution that would convert CO2 into ethanol, a process powered by renewable electrical energy that splits water into oxygen and hydrogen. The hydrogen is then combined with CO2 — captured directly from the atmosphere using absorption materials or purchased from Direct Air Capture plants — to produce ethanol for a variety of products.

“We decided to produce ethanol because it is widely used in several industries and fields,” Licata says. “You can find it in food, cosmetics, sanitizers and, of course, alcoholic beverages.”

The first solution of its kind, CO2GNAC’s biggest challenge — but also its novelty — is the fact that there is nothing quite like it. “In Europe, there aren’t technologies as innovative as ours, and our greatest challenge is developing a solution from scratch,” says Licata. 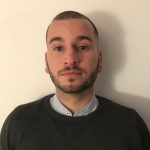 “We wanted to contribute proactively to the climate change issue and the effects of global warming,”

Working with a professor of chemistry from the University of Udine, as well as other researchers and business advisors, the team is in the research and development phase. Licata says that within two years, they will have the prototype complete and will be producing ethanol for consumer products. Once they do, his hope is that this technology will not only shake things up but will empower others to do the same.

“Today there is no industrial production of ethanol from CO2,” says Licata. “The timing is the right one — this is the moment to disrupt the sector. If more companies start to invest in carbon capture and conversion, the whole sector will benefit from this, thanks to open innovation.”

The University of Udine will represent Italy at the Enactus World Cup starting 14 October 2021, where the team will present their project alongside 32 other Enactus National Champions. There, they will demonstrate their innovation in business and its impact on the world as they vie for their chance to become the Enactus World Champion.