An Enactus Ireland student recently wrote a blog about her experience in Enactus. Many of our members write about their stories, and we love to hear about them. After reading Claire Breathnach’s story, share your own in the comments.

There have been many situations throughout my life when I have had to step up to the plate and become a leader. For example, when I was 7 years old and my classmates relied on me to speak up and remind the substitute teacher that we didn’t get homework on a Friday. But there have also been times when leadership has been entrusted upon me, such as in 6th year when my teachers and peers voted me as their Head Girl. Regardless of the circumstances, there is something inside of me that yearns to lead, take action and be part of a team. Enactus has provided me with a platform in which to do so.

This is not just my Enactus story but a story of my own personal development during my college years. 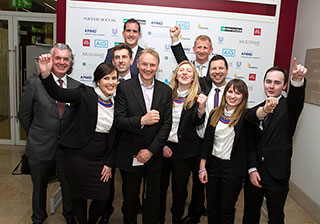 For many young people beginning college is an exciting time. However, I was fortunate to have had a wonderful six years in secondary school. I had lots of friends, inspiring teachers, and a community where I belonged. Above all, my time in school really shaped the young woman I was becoming. Thus the thought of leaving all that behind was daunting.

In fact, college was a major change and the first year was a difficult time for me. I transformed from an individual who was always involved in one thing or another, to a student who commuted to college and only attended lectures. Although I enjoyed my studies, I felt empty, bored and as if I had no purpose.

Nevertheless, one little email changed everything. The student engagement officer had sent out an email to all students inviting us to attend a talk about making a change in our communities. The email had me at the word “change”, because that was exactly what I needed in every way.

The talk was delivered by Laura Dennehy and from the moment she played the first Enactus introduction video I knew I was hooked.

Becoming an Enactus student gave me a whole new lease of life. I began to feel like myself again. I was motivated and inspired. I was hopeful for my future and it felt amazing to know that young people really had the ability to change the world we live in.

As a student that commutes back and forth each day and works part-time most nights, Enactus was perfect for me. It allowed me to be involved in activities during the college day (which is very rare as most societies hold events in the evenings.) Enactus also gave me the opportunity to make friends from different courses and create a connection with members of faculty, as well as those from the business world. I always thought that college wasn’t for me until Enactus showed me otherwise.

My career path also received a major change as a result of becoming an Enactus student. I chose to study English and Geography because I’d always wanted to be a secondary school teacher. Although I am passionate about both subjects, the real reason I wanted to teach was because I believed that that was the only way I could change a young person’s life; to be a role model like the teachers I had. But being a part of Enactus showed me that using the power of entrepreneurial action can really create a better world. Through Enactus, I developed new skills and unlocked other talents I didn’t even know I possessed.

This blog post was written by Claire Breathnach, Enactus National University of Ireland Maynooth Project Leader, and was originally posted on the Enactus Ireland blog.