It’s no secret that Enactus students see opportunity where others often don’t. It’s this natural curiosity and positive outlook that sets them apart from other students, and it’s a characteristic shared throughout our global network. The Enactus Canada National Competition is a great example of this.

Nearly 1,100 people converged on the Calgary TELUS Convention Centre from 28-30 April for our fifth national competition. Over three rounds of competition, 49 teams presented their outreach initiatives to 214 executives serving as judges. In the end, Memorial University of Newfoundland was named the 2014 Enactus Canada National Champion and awarded the Tim Hortons Cup, impressing judges with their work including Project Bottlepreneur, which provides unemployed individuals with training and resources to start their own recycling companies, empowering them to become financially stable while addressing their province’s limited access to recycling programs. Participants earned twice the minimum wage, earning over $90,000 in revenue and recycling over 1.8 million containers this year alone. The Student Entrepreneur National Competition, sponsored by The John Dobson Foundation, also took place during the event with Alex MacLean, owner of East Coast Lifestyle Clothing Incorporated and full-time student at Acadia University, being named the Student Entrepreneur National Champion.

Other event highlights included the career fair, where students had the chance to network with recruiters from 10 companies; ‘Talent Talks’ employer workshops, which gave sponsor companies an opportunity to connect directly with students on important issues; the Executive Forum, which brought together top business, academic and student leaders to discuss next generation leadership development; and an opening ceremonies keynote address from Gwyn Morgan, former CEO of EnCana Corporation who shared his thoughts on leadership and social responsibility. The successful competition garnered significant media coverage, including this post-event television interview.

“If you unleash your creativity, provide leadership and mentorship, and work together as a team…you can achieve success.” – Gwyn Morgan

But the opportunity to learn and share went beyond the competition itself. To kick off and build awareness for the event, they held the See Opportunity Showcase, a walk through display in downtown Calgary where teams shared details and products from their projects, and included a welcome from the Mayor of Calgary, Naheed Nenshi.

Pleasure to welcome the students from @Enactus_Canada on the lunch break. Check out the High River market on Stephen Ave today! 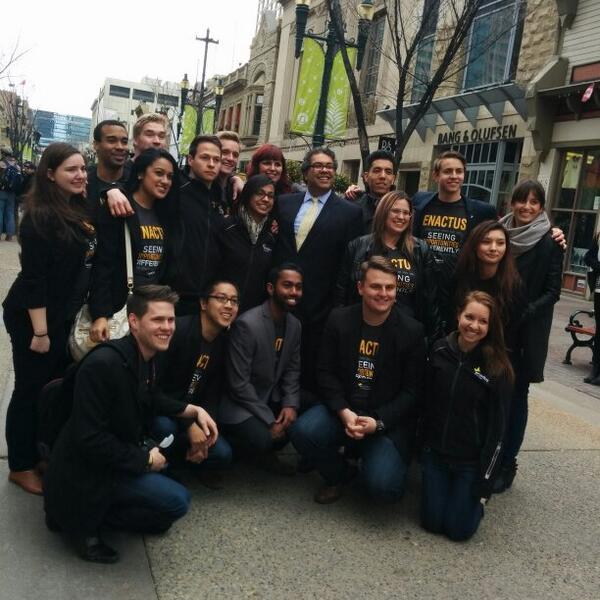 The Enactus team from St. Lawrence College took the opportunity to expand their work on hunger issues by visiting the food bank in Calgary to learn how they operate and share some of their own initiatives including a low-cost, high-nutrition recipe book the team developed.

Shoutout and thanks to @EnactusSLC for their visit, donations and sharing their recipe book with us! #yyc pic.twitter.com/b7RZnmeDxN

If you followed social media during the event, you saw the overwhelming number of congratulatory and supportive messages between teams, often using the hashtags #weareallbestfriends and #Enactuslove. The team from Ryerson University, for example, tweeted every team their congratulations, and many others sent messages after presentations, highlighting unique aspects of the projects presented.

The Enactus Canada National Competition is a great reminder of how we all have the potential to make a difference, every day. For us, seeing opportunity is not just a tag line; it’s a way of life.

Check out this flashback video created by the Enactus Mount Royal University team:

Shout out to all of the @Enactus_Canada school teams participating in #ecnationals this week. Good luck on your journey for the Tims Cup!

Amazing young entrepreneurs at #ECNationals @Enactus_Canada in #yyc today. Makes me wish I was 20 again and could start a biz at that age.

Congratulations to all teams competing here at #ECNationals. We all do great work and its amazing to come together and celebrate!

Congrats to the brave, inspirational entrepreneurs who presented @ #ECNationals in #Calgary today & good luck to the finalists! @enactus

After 2 days judging and watching #ECNationals @Enactus_Canada I feel the urge to be a part of something bigger than myself. #action